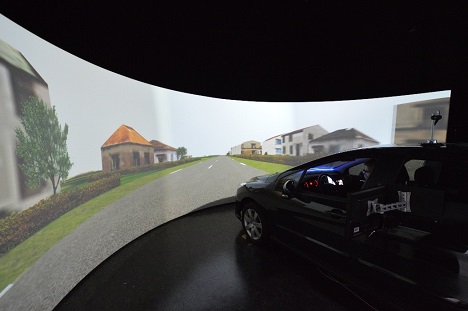 Two experiments involving significant simulation resources and numerous volunteer subjects recently took place at UBFC, in the context of the PAsCAL project. Indeed, UBFC coordinates five simulation experiments of the PAsCAL project and directly operates two of them. The other three are carried out by the LIST (Luxembourg Institute of Science and Technology) and the University of Liverpool.
The five experiments explore the acceptability of autonomous and connected vehicles among different parts of the European population and study user behaviour. But each simulates different situations, involving different types of autonomous vehicles and/or different populations.

Experiment #1 focuses on Level 3 semi-autonomous vehicles, those that are or will be able to drive themselves on certain roads and/or under certain conditions. Their drivers can stop watching the road and go about their business, but they must be ready to take the wheel again when the vehicle asks them to. They then have a few dozen seconds to apprehend the situation and take over the controls while ensuring safety.

The safety stakes are high during this transitional phase of resuming driving, and this makes level 3 semi-autonomous vehicles a particularly critical stage in the progression towards level 5 vehicles (100% autonomous).

Experiment #1 aims to evaluate the effectiveness and acceptability of several different signals informing the driver that he/she should resume driving after a phase of driving devolution. It is also interested in the impact on confidence of the possible display of information on the perception of the environment by the car's sensors. Finally, it will compare the acceptability and behaviour of novice drivers with those of more experienced drivers.

More than 40 volunteers were recruited for this experiment. They are between 18 and 85 years old and mostly live near Montbéliard, for convenience. We made sure that the panel was diverse in terms of age, gender, socio-professional categories and driving experience (novice and more experienced).

The driving simulator and its novel man-machine interface

We invited each of them for half a day on our facilities, so that they could experiment with level 3 semi-autonomous driving on the UTBM's (member of UBFC) driving simulator. This is a real Peugeot 308 whose controls are instrumented and connected to a cluster of computers running the simulation software provided by the Gustave Eiffel University. It is placed in front of a large hemi-cylindrical screen 5 metres in diameter, providing a highly immersive image. Three TV screens support the rear view.

The Peugeot 308 incorporates a multi-channel human-machine interface (HMI) specially developed for the needs of the project, in collaboration with the company Inetum (another PAsCAL project partner). It consists of a touch-sensitive tablet installed in the centre of the cockpit, on which runs an application managing all the functions linked to autonomous driving, as well as feedback on the perception of the environment by the vehicle's sensors. The tablet displays graphic or text messages, but also sends audio and/or voice messages through the vehicle's speakers and light signals over a long LED strip at the foot of the windscreen.

To progress in the understanding and mastery of this transition from autonomous driving to manual driving, the scenario of experiment #1 puts the subjects in a situation where they take control of the vehicle six times, in different driving conditions, with different types of signals asking them to take over the steering wheel. It also tests the effect on confidence of possible visual feedback on the perception of the environment by the car's sensors, which is available to only half the subjects.

Experiment #2 is about fully autonomous Level 5 vehicles. These are still only science fiction today: they would be vehicles capable of driving by themselves on all road networks, in all traffic and weather conditions. They could take the form of robot taxis without steering wheels or pedals. Experiment #2 is a small on-demand transport shuttle that can accommodate between 1 and 6 passengers and take them wherever they want to go, within the perimeter managed by the mobility operator.

The aim of experiment #2 is to evaluate the acceptability of such a service (transport on demand by level 5 shuttles, i.e. fully autonomous) by wheelchair users. But also, the perception of such a service as part of a multimodal journey (to get from point A to point B, the user combines several means of transport (walking, cycling, conventional bus, autonomous shuttle, tramway...) and the willingness to pay for an improved, more high-end service.

11 volunteers were recruited for this experiment. They were between 18 and 54 years old, had a motor disability and were all wheelchair users. They were recruited with the help of associations and physiotherapists within a radius of about 100km around Montbéliard. With such a small number of participants, it is difficult to be representative, but their ages and professional situations are nevertheless very diverse.

We invited them each for half a day to our premises, so that they could experience a virtual multimodal journey on our immersive virtual reality platform. The platform wireless VR platform consists of a powerful PC running the simulation software, state-of-the-art WiFi equipment and a wireless virtual reality headset. We have also invested in a CleanBox, a device that disinfects the VR headsets quickly and efficiently using ultraviolet light, to ensure no risk during the COVID-19 pandemic. Everything takes place in a large, almost completely empty room with a simulation area of 50 m², in which the subject can move freely with his wheelchair.

Once the subject is equipped with the VR headset, the simulation plunges the subject into a suburban environment, near a bus stop. A first autonomous shuttle bus appears, with similar services to those of a conventional bus, and takes the subject to the nearest town. It stops near a cash dispenser, which is only a pretext to justify the connection. The journey continues with a short bus trip (a regular, conventional line) and then, after a second connection justified by a letterbox, ends with a new journey in an autonomous shuttle, this one offering much more upmarket services and taking the subject back to his or her point of departure.

The second, high-end autonomous shuttle has the same size and body as the first but differs in its interior layout. It offers 4 seats thanks to large, comfortable-looking armchairs instead of the 6 bus seats of the first one. It also swaps rustic materials for more refined fittings (parquet flooring, light oak veneers, light-coloured trim, and a glass roof make up a bright and warm interior) and offers each passenger a fold-out tablet with a touch screen and an advanced infotainment system, demonstrating a number of services (streaming music and radio, newspaper reading, information on the current journey, etc.).

For each of the two experiments, the subjects were given an initial questionnaire two weeks beforehand. On the day of the experiment, they are equipped with physiological sensors (eye tracking, heart rate, finger perspiration, etc.) recording their reactions during the whole simulation. At the end of the simulation, they are removed from their equipment, fill in a new questionnaire and have an interview to gather their impressions, evaluate their attitude and their intentions towards the autonomous vehicles they have been able to experience... in preview and in complete safety thanks to the simulators!

All the results of the test conducted by the University of Burgundy - Franche-Comté (UBFC) as part of the European PAsCAL project will soon be published in a specific scientific paper and will therefore be used, together with all the other data collected from the tests conducted by the other partners, for the purposes of the project.